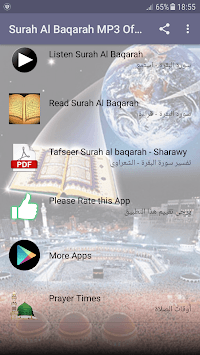 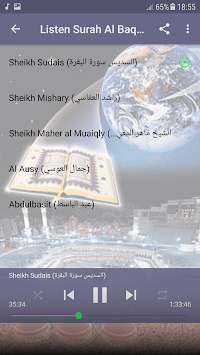 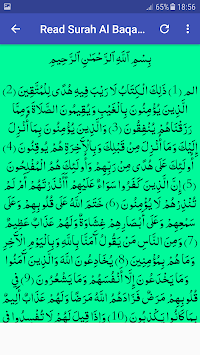 Download this App and listen to Holy Quran recitation of surah al baqarah offline on your mobile device.

Application Features:
With app you can do the following:

The surah al baqarah is the longest surah in the Holy Quran and reciting it more upon, drives away Jinn from the place it is recited. It is of significant important to listen more upon to this surah al baqarah or even memorize its verses.

- You can read and listen at the same time.

- Read Sheikh Muhammad Metwali Al-Sha'raawi Tafseer of surah albaqarah offline verse by verse from verse one to verse two hundred and eighty six. The tafseer is in Arabic text.

The following reciters are available:


Download this App if you want to listen to The Holy Quran Recitation of Surah albaqarah offline on your mobile device.

The Cow or Sūrah al-Baqarah (Arabic: سورة البقرة‎, "The Cow") is the second and longest chapter (Surah) of the Qur'an. It consists of 286 verses, 6201 words and 25500 letters. It is a Mediniite surah, that is to say that it was revealed at Medina after the Hijrah, with the exception of a few verses which Muslims believe was revealed during the last Hajj of prophet Muhammad (pbuh), the Farewell Pilgrimage.

This is the longest Surah in the Quran. It was the first Surah to be revealed at Medina, but different verses were revealed at different times, covering quite a long period so much so that the verses with regard to riba (interest or usury) were revealed in the final days of prophet Muhammad (pbuh), after the conquest of Makkah (Maariful Quran).

The verse 281 in Surah Baqarah, is the last verses of the Quran to be revealed, this happened on the 10th of Dhul al Hijjah 10 A.H., when prophet Muhammad was in the course of performing his last Hajj, and only eighty or ninety days later he died (Qurtubi).

Surah al-Baqarah enjoins fasting on the believer during the month of Ramadan.

It is the longest Surah in the Qur’an and was revealed over a long period. It is a Mediniite Surah dealing with the Hypocrite (Munaafiqeen) and injunctions pertaining to various matters.

It includes many verses which have virtues like the first four and last three verses and the special Verse of the Throne (Aayatul Kursi). Prophet Muhammad is reported to have said,

“Do not turn your houses into graves. Verily, Satan does not enter the house where Surat Al-Baqarah is recited.” [Muslim, Tirmidhi, Musnad Ahmed]

Ad-Darimi also recorded that Ash-Sha`bi said that `Abdullah bin Mas`ud said, "Whoever recites ten Ayat from Surat Al-Baqarah in a night, then Shaytan will not enter his house that night. (These ten Ayat are) four from the beginning, Ayat Al-Kursi (255), the following two Ayat (256-257) and the last three Ayat.

Notable verses:
Verse 255 is "The Throne Verse" (آية الكرسي ʾāyatu-l-kursī). It is the most famous verse of the Qur'an and is widely memorized and displayed in the Islamic world due to its emphatic description of God's omnipotence in Islam.

Verse 256 is one of the most quoted verses in the Qur'an. It famously notes that "there is no compulsion in religion". Two other verses, 285 and 286, are sometimes considered part of "The Throne Verse".

Apart from the surah al bakarah many more surahs are available in my catalog. Just search for kareemtkb and you'll see all my apps.

If you like this surah baqarah mp3 app please consider leaving a positive review for it in the store.

Thank you very much foe checking out this surah bakarah mp3 app!