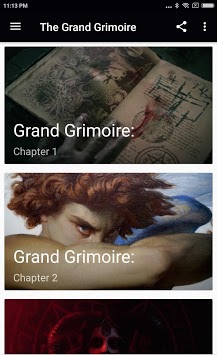 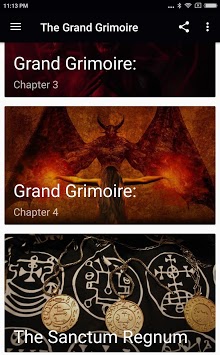 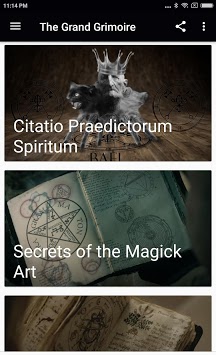 The Grand Grimoire, sometimes referred to as the ‘Red Dragon’ or the ‘Gospel of Satan’, is a medieval grimoire believed to possess immense powers. According to legend, it was written by an apocryphal figure by the name of Honorius of Thebes, who is claimed to have been possessed by Satan himself. The Grand Grimoire is said to be one of the most potent occult books in existence, and contains instructions for the summoning of Lucifer or Lucifuge Rofocale, for the purpose of forming a Deal with the Devil.

This grimoire is often said to have been written during the 16 th century. During the 18 th century, when there was a ‘cheap grimoire boom’ in France, a version of the Grand Grimoire was produced, and then published in the following century. The original Grand Grimoire (or a copy of the original), however, is said to be kept today in the Vatican Secret Archives, and is not currently available to the public.

Contents of this The Grand Grimoire app includes:
😈 Grand Grimoire: Chapters 1 to 4
😈 The Sanctum Regnum
😈 Citatio Praedictorum Spiritum
😈 Secrets of the Magick Art
😈 Solomon’s Mirror
😈 Table of Lucky and Unlucky Days
😈 The Secret of the Black Hen
😈 Great Invocation to Summon the Spirit with whom one wishes to the pact.
Excerpted from The Great Clavicle
😈 Other Magick Secrets

We hope you'll enjoy the contents of this app. Please leave a rating and review to let us know how it went for you.