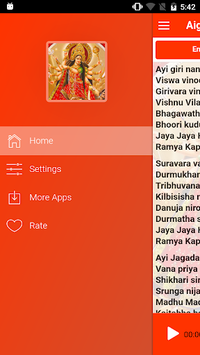 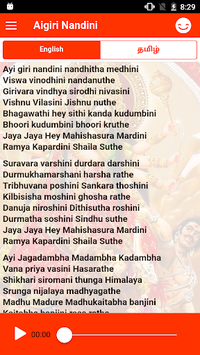 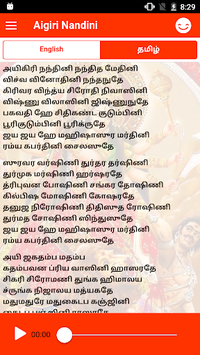 We have all heard and sung the famous bhajan "Aigiri Nandini Stotram". The seemingly complex hymn is written in Sanskrit lyrics 2500 years ago by SRI ADI SHANKARACHARYA.

This devotional application contains English and Tamil Lyrics. You can choose which one you want to see when the hymn is being played.

Lyrics will be automatically moving along with the song play.

The app consists of the audio song of Aigiri Nandini Stotram along with English and Tamil lyrics. The lyrics of the song is scrolled inline with the audio while it is being played.

Features:
1) Listen the song offline. No internet is required.
2) English/Tamil Lyrics will be auto scrolled while song is playing.

It is one of the best devotional on Durga Devi with lyrics.