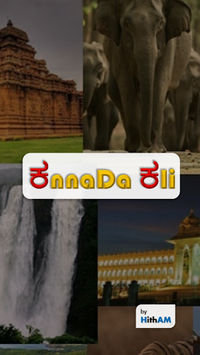 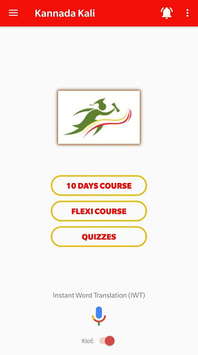 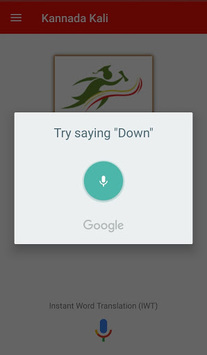 Learn Kannada (Kannada kali) is an android app developed exclusively for those who want to learn spoken Kannada on the go. Along with Day Course, it also provides "Flexi Course" which helps people learn Kannada at their own schedule. App also provides the smart feature of "IWT (Instant Word Translation)" which helps users find instant word translations from English to Kannada. The app is smart enough to verify your pronunciation and provide valid feedback. Once you are confident enough, you can take specially designed 30 sets of quizzes under three levels of difficulty.

The app aims at teaching spoken Kannada to non-Kannadigas within just 10 days. The app is smart enough to teach them the pronunciation of each and every word and also test if they are pronouncing it the right way.

2. What does the app contain?

10 days course where a user can learn basic spoken Kannada with an example sentence for each word, everything with audio!

Flexi Course which gets divided into "Alphabet", “Words”, “Conversation”, “Random Magic” and "Antonyms".

a. Alphabet - Learn Kannada Alphabet pronunciation and also learn on how to write it. The user will have a dedicated screen to practice writing.

e. Antonyms - Words and its antonyms all with script and voice!*

Quizzes- 300 MCQ questions to test yourself.

3. When was the app launched?

The beta version app was first launched on Nov 30, 2017, and so far the app has grown a lot on both technology and the user base.

4. What are the important statistics about the app?

As on 4th Oct 2018, the app has currently got more than 61,000+ downloads without marketing or promotion. The app has been spread only based on mouth marketing by users. The app also has 1200+ ratings with an average of 4.6+. The app is being used in more than 58+ countries worldwide!

The app has been built by HithAM Creations a team of just us two developers Varun and Rohith. We developed this app with help of one more friend Pooja HN for voice, all are working in Bengaluru, Karnataka. We always wanted to help interested non-Kannadigas learn Kannada and we were searching for a way to help a larger audience. That's when we started developing this app. We are still working on adding new features to the app which should make the learning more easier.

What else do we have other than android app?

Please search for "Learn Kannada - Smartapp" in any of the above locations to find us and connect :-)

For any feedback or reporting, you can send an email to us at [email protected]