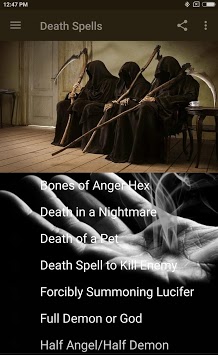 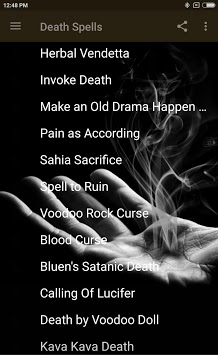 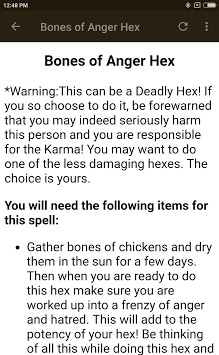 Black magic has traditionally referred to the use of supernatural powers or magic for evil and selfish purposes. With respect to the left-hand path and right-hand path dichotomy, black magic is the malicious, left-hand counterpart of the benevolent white magic. In modern times, some find that the definition of "black magic" has been convoluted by people who define magic or ritualistic practices that they disapprove of as "black magic".

Real practitioners consider spells which fight against, or try to manipulate free will as black magic. Because these spells try to influence the normal life of others, they can become pretty dangerous if they backfire. Free will is considered by some as the strongest force in nature so care should definitely be taken when dealing in the dark arts.

As a sub set of the Health Spells in general, the death spells in this app are some of the most powerful spells found.

Although none of the spells will directly cause the death of the intended victim, they will cause the body to get ill and die.

However, because of the power of the spells, when they backfire onto the caster, they are usually much more powerful then they would normally be, making removal of a mis-cast death spell nearly impossible.

We hope you'll enjoy the contents of this app. Please leave a rating and review to let us know how it went for you.

*Disclaimer - Garden of Serenity is not responsible for the outcome or lack off in using the spells contained within this app. Use with discretion.*