Improve your chess skills and challenge your friends in our Chess app today!
Published by  Ciaolink Apps
106  Ratings40  Comments 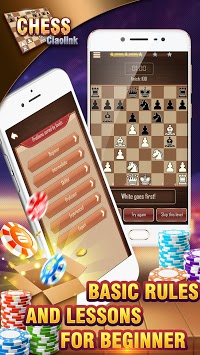 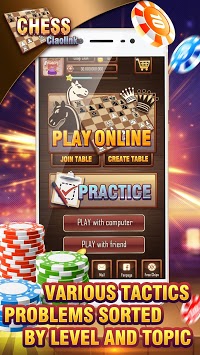 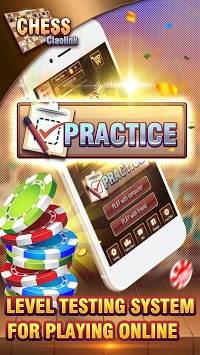 Chess, one of the oldest board games, is played by millions of people worldwide. Each player has 16 pieces including king, queen, rooks, knights, bishops, and pawns, with the most powerful being the queen and the least powerful the pawn. The objective is to checkmate the opponent's king by placing it under an inescapable threat of capture. Pieces are moved or jumped through the square on chess board to attack and capture the opponent's pieces, while supporting each other. In addition to checkmate, the endgame can be achieved by voluntary resignation of the opponent, which typically occurs when too much material is lost or checkmate appears inevitable. There are also several ways a game can end in a draw.

We offer the best chess game through our Real Chess app (featuring extremely hard chess game play and practices) in the world for absolutely free! There are fifteen levels of ascending difficulty featuring elo from 100 elo 1800 respectively. Our Free Chess Online Games app caters to the need of all type of players, from chess newbie to chess master, by offering realistic chess playing experience formulated from world best players' moves. Download our game now to test your chest ability by playing with our increasingly difficult computer program.