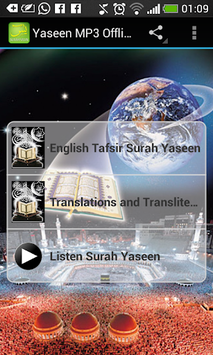 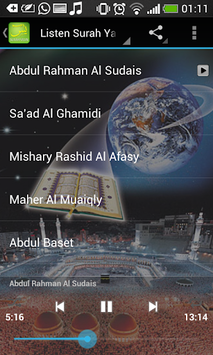 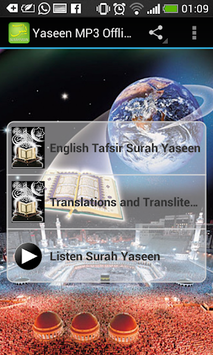 Below are Hadith from the Holy Prophet Muhammad (Peace be upon him) about surah yasin:
1 Anas (RA) reported Allah’s Messenger (saw) saying, "Everything has a heart and the heart of the Holy Qur’an is Yasin. Allah will record anyone who recites Yasin as having recited the Holy Qur’an ten times." Tirmidhi, Darimi
2. Ata ibn Abi Rabah (RA) told of hearing that Allah’s Messenger (saw) said, "If anyone recites Yasin at the beginning of the day, his needs will be fulfilled." Darimi
3. Maqal ibn Yasaar Muzani (RA) reported the Holy Prophet (saw) saying, "If anyone recites Yasin for Allah’s pleasure, his past sins will be forgiven; so recite it on those who are dying." Baihaqi
4. Anas (RA) reported Rasulullah (saw) saying, "Whoever goes to the graveyard and reads Surah Yain Allah gives them (the grave dwellers) ease that day, and the reciter receives spiritual blessings equivalent to the amount of letters of Surah Yasin.” Qurtubi
5. Maqal ibn Yasaar (RA) reports that the Holy Prophet (saw) has said, "Recite Surah Yasin on those who are dying." Abu Dawud
6. Ummud Darda (RA) reports the Noble Prophet (saw) saying, "Over no person who is about to die and Surah Yasin is read upon them but Allah lightens the difficulties of death for him." Qurtubi
7. Abu Hurairah (RA) says that the Messenger of Allah has said, "Whoever recites Surah Yasin at night seeking the pleasure of Allah , that night he will be forgiven." Abu Nuaym.

Apart from surah yasin quran App, other Islamic Apps like Audio Quran complete online and Juz AMMA offline are available in my catalog. Islamic ringtones like du'a Islamic ringtone, salam ringtone, fajr ringtone and many more are also available. There many more to come in shaa Allahu.

If you like my Surah Yasin App please consider leaving a positive review and/or rating for it in the store.
Thank you very much!

Thank you very much!