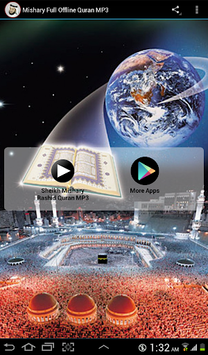 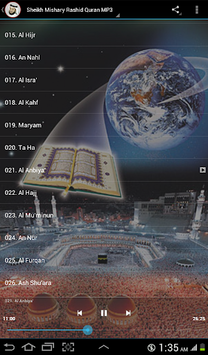 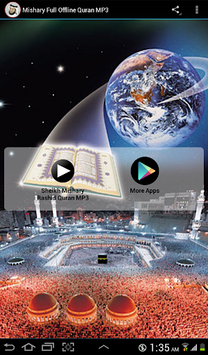 This application is the complete Holy Quran mp3 offline recitation of sheikh Mishary Rashid Alafasy. This is because Google increased the APK size that can be uploaded to play store up to 100MB but this Application of mishary Rashid is less than the 100mb.

If you like this full Quran mishary rashid offline please consider leaving a positive review and/or rating for it in the store. This will boost the App position and other muslims can find this mishary app easily.

Brief about the reciter mishari Rashid:

Life and career of alafasy:
Mishary Alafasy is recognized for his beautiful voice and unique recitation of the Qur'an. Many reciters have come to imitate his mode of recitation. He studied the Qur'an in the College of the Holy Qur'an at the Islamic University of Madinah ( Kingdom Of Saudi Arabia). He memorized the whole Qur'an in two years from 1992 to 1994 and then studied specializing in the ten-fold reading of the Holy Qur'an. He has impressed a number of great reciters of the Qur'an with his recitation.

Mishary Al Afasy is the Imam of Grand Mosque (Kuwait), and every Ramadan he leads the Taraweeh prayers in this Mosque. He very often leads the Taraweeh prayers in the UAE and other neighboring countries in the Persian Gulf. In 2007, he visited two mosques in the United States of America : the Islamic Center of Irvine (ICOI) in California and the Islamic Center of Detroit (ICD) in Michigan. Alafasy has 2 Space Channels specialized in the recitation of the Holy Qur'an, the first is Alafasy TV and the second is Alafasy Q.

Awards and recognition:
On October 25, 2008, Mishary was awarded the first Arab Creativity Oscar by the Arab Creativity Union in Egypt. The event was sponsored by the Secretary-General of the Arab League, Amr Moussa as a recognition of Mishary Alafasy role in promoting Islamic principles and teachings. Al-Afasy was voted by readers to be the Best Qur'an Reciter in the 2012 About.com Readers' Choice Awards.