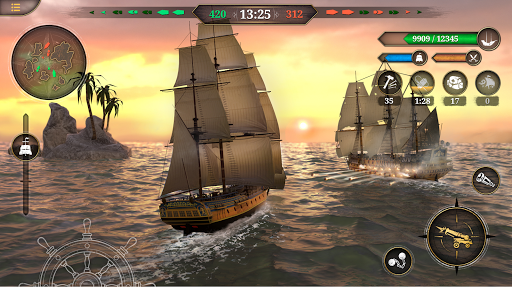 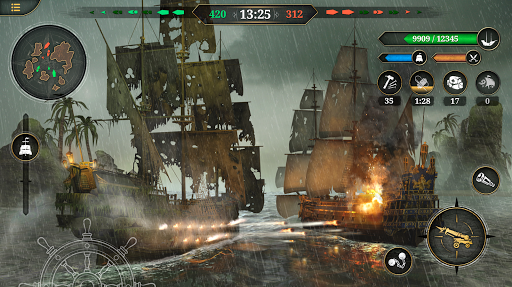 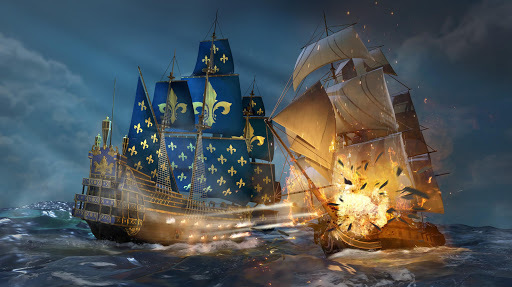 KING OF SAILS: ROYAL NAVY
Awesome online battles of the legendary sailing ships of the 18th century. Immerse yourself in the world of historical pirate battles, become captain of a military ship in the golden age of shipbuilding! Conquer the Caribbean Sea, destroy enemies, ram your opponents and go to the naval boarding! Corsairs, privateers, skipper, pirates feel yourself in the role of the invader of merchant and warships. Use all the capabilities of the ship to achieve victory in the online blitz battle.

⚓ Team battles
Battleship against warship, will win the team that first sink all enemy ships!

⚓ Dynamic battles
Battles take place in the Caribbean Sea between the battle islands. Hide from the volleys of opponents, use tactics of naval combat battles, and in no case don’t approach the ships of the opponent. Since there is a boarding in the game! Take care of sails ship, they scorch up from hits!

⚓ More than 12 sailing ships
In the game over 12 sailboats of the golden age of shipbuilding - from Pandora and Aurora to the legendary ghost ship Flying Dutchman;

⚓ Beautiful 3D graphics
Impressive drawing of all elements of the game. Ships and textures are made to the smallest details, such as hull, mast, rigging, sails, ship’s wheel;

⚓ Simple and intuitive control
Raise or lower the sails ships, depending on the needed speed. Improve the boat speed and maneuverability of your ship for better control.

☸ Corvettes
Fast and maneuverable ships, but they are armed with small and medium-sized mortar. Scout ships!
☸ Frigates
Light and fast ship, medium size. The frigates are the most actively used ships of the sailing fleet!
☸ Battleships
The largest sail boat of the navy of the 18th century, have on shipboard heavily armed artillery. Used to destroy the light ships, the battleship is a fearsome force!

Sea battle online on sailboats of the 18th century. Participate in online battles against other players in team battles 5 vs 5. Use the tactics of naval combat, hide from the enemy's artillery, hide behind the islands and strike back!

The game is absolutely free to download online multiplayer games, but some elements are paid!
The application requires a stable Internet connection.