Listing with All Battle Royale Weapons and its Characteristics!
Published by  CCL Apps
1,550  Ratings742  Comments 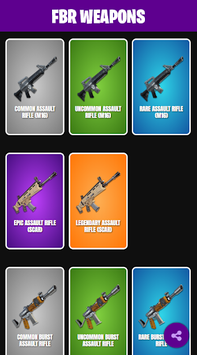 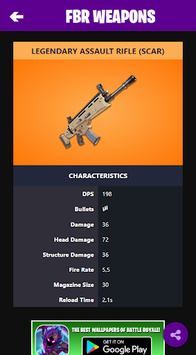 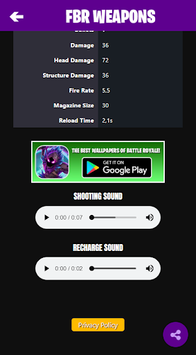 Battle Royale, is the best-known game currently and in which many Youtubers invest as much time as possible in playing to attract the majority of the public that has been hooked on the creation of Epic Games.

The weapons of Battle Royale play a fundamental role in this game, because depending on the weapon that is achieved it will be able to do more or less damage to the enemy that we find on the way to the VICTORY ROYALE, that's why we created this App so you can learn what the statistics and characteristics of each Battle Royale Weapon are.

Still do not know the damage that a SCAR in the head or a C4 in a construction does? Do not worry, because downloading this application you will be able to discover the damage that each weapon inflicts on your opponent, although You can also know other features.

What features of the weapons will I find in the App?

In each new Battle Royale update where new weapons are included, if you have our App installed, you will be the first to know, as we send a PUSH notification so you can be informed at the time of the new weapons. game.

If you are a lover of Battle Royale, this application can not miss on your mobile devices, because to achieve a masterly victory you must know the damage done by each weapon to choose at all times what to carry and which to replace by others.

What are you waiting for to download our App?