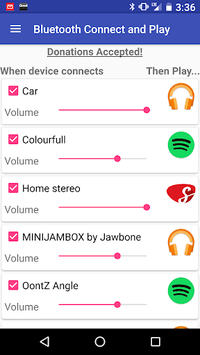 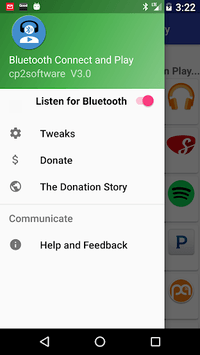 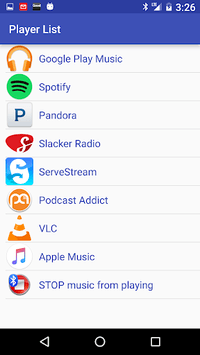 Please read
For a Bluetooth device to play music, it must support the A2DP (e.g. Stereo) standard, otherwise it can't stream music (http://en.m.wikipedia.org/wiki/Bluetooth_profile)

Have you ever wanted to get into your car and when Bluetooth connects to your phone the music just starts playing where it left off in the player of your choice?

This app is designed to tie the Bluetooth connect event to playing the music player of your choice. Unlike other auto-play options, this allows you to select the specific player that should be used. Do you want Spotify instead of Google Music Player, you can select that, do you want TuneIn instead of the Core Android music player, no problem.
Why would you want this? Some Bluetooth receivers do not play at all, some target the stock music player, this puts you in control of what happens when Bluetooth audio connects.

**Important Note**
This App assumes you already have the subject Bluetooth device Paired to your phone using the BT device manufacturer's unique approach. It won't help Pair the device, the list that shows (as in the App picture) is a list of Paired (sometimes called Bonded) devices.

This App starts a Music App by package name and broadcasts "play" to start the player. NOT all players support this. Some players that work:
* Google Play Music
* Core Music Player
* DoubleTwist
* Android Music
* PowerAmp
* Rocket Player
* iHeart Radio: Best if you select "Play last station on startup"
* Pandora: Must select "Bluetooth for Automotive" in settings
* TuneIn: Best if you select "Auto restart Player"
* Slacker: Best if you select "Resume Play on Startup"
* Spotify
* Maple MP3 player. Note: Must set "Respond to Headset Buttons" to ON
* zPlayer
* Doods
* Many more

THANK YOU FOR SUPPORTING EDUCATION!
Update 9/17/2014
Going into 2014/15 school year donation was $600 plus $600 company matching dollars so $1200 being donated to PTA in my school district. Thank you for support!
Update 12/27/2013
Approximately 80 donations via this app and a direct $20 donation via Paypal. Thank you so much to the generous donation! So, 80 downloads @ $2.29 * 0.7 (store fees) is about $130 + $20 direct = $150 plus company matching dollars (dollar for dollar match) =$300 ! Great start in 2013 for apps for education.
Update 10/24/2013
PTA invest for success campaign has almost equaled last years donation level of $70,000 dollars. Our donations are in there!
Update 10/5/2013:
PTA formed a Dads Group (promoting male influence in elementary school). Money contributed to class supplies in this case funding the Dad's group painting walls for teachers for educational emphasis
Update 9/20/2013
With the start of the 2013 school year, these donations, along with my personal donations, have helped:
1. Purchase Math Manipulatives:Visual tools to help kids learn math skills, Blocks, sticks etc..
2. Puchase STEM (Science, Tech, Math) materials: this year Science LAB equipment has been purchased.

Explanation of Permissions:
* In-App Purchase: Donation to Education rather then a separate App.
* Network/Create Bluetooth connections: Obvious
* Phone Calls/Read phone state: If in a phone call, this app will wait until you hang up to start the music player
* System Tools/Change WiFi state: there is a Tweak that can turn off the WiFi if you want when Bluetooth connects.
* Network/view Wi-Fi state: support tweak Restore Wifi on disconnect so have to read Wifi state