Trivia board game Play with your friends in the most competitive quiz!
Published by  Trivial & Quiz - DiabloApps
2,732  Ratings946  Comments 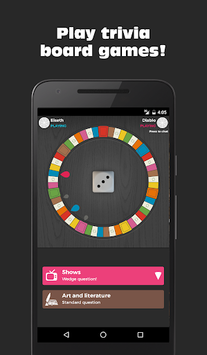 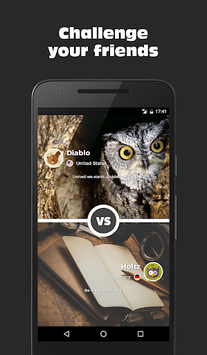 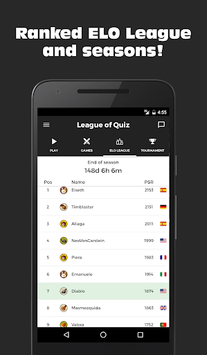 League of Quiz is a free trivia quiz game with multiple game modes and tournaments. Challenge your friends in board trivial pursuit games or in duels competing in the ELO League. Also you can play friendly games or in one player mode with rankings.


◆ Board game
You can play board games like classic Trivial Pursuit with friends or random players around the world.

◆ Challenges
Challenge your opponents in a quick duel game. Answer an amount of questions that will be equal for both players where the winner will be the one that guesses more right. Also available themed challenges.

◆ ELO League
Beat your opponents playing board games and challenges to compete in the competitive league ELO. At the end of each season they will be distributed to the three most highly rated in the league trophy to prove who is the best player.

◆ One player
You can play in one player mode in any category and get ranked for each category. Climb the ranking and get your deserved reward!

◆ Private Tournaments
As if that were not enough, you can create and configure your own quiz trivia tournaments and invite who you want. These tournaments also have their reward as a trophy!

◆ And much more!
- +100,000 questions
- Chat
- Customize your profile with awesome avatars and wallpapers.
- Contributes to the game by sending your questions and valuing the community. The questions are then checked for correctness and quality.

Flags and Capitals of the World Quiz