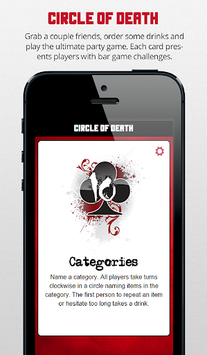 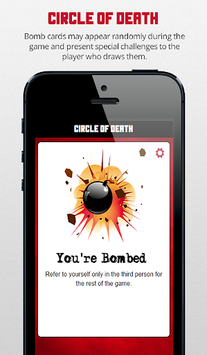 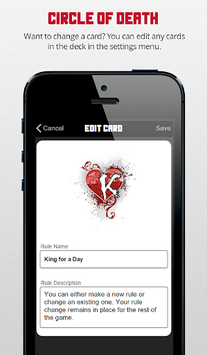 The classic card-based drinking game Circle of Death goes by many names in dorm rooms, bars and house parties around the world: King's Cup, Waterfall, Ring of Fire. Gather some friends, fill up your cups and sit in a circle to play this lively and fun drinking game.

Circle of Death also includes star cards which rotate out every month with new and fun challenges for the whole group, such as Thumper, 2 truthes and a lie and more.

The game comes with a standard set of rules based on the classic game, but you can easily edit them in the settings. The standard Circle of Death rules are:

Ace - Waterfall
Everyone begins drinking. The person who drew this card is the first to stop drinking. All other players drink longer than the player to your right.

King - Make a Rule
You can either make a new rule or change an existing one. Your rule change remains in place for the rest of the game.

Jack - Never Have I Ever
Everyone holds up three fingers. You start by naming something you've never done. Everyone who has done it, puts down one finger. Keep naming items until someone loses all three fingers. That person drinks.

10 - Categories
Name a category. All players take turns clockwise in a circle naming items in the category. The first person to repeat an item or hesitate too long takes a drink.

9 - Rhymes
Say a word. All players take turns clockwise in a circle saying something that rhymes with the word. The first person to repeat a word or hesitate too long takes a drink.

8 - Mate
Pick another player and take a drink with them.

7 - Game of Sevens
All playes begin counting numbers clockwise in a circle beginning with the person who drew the card. For every multiple of 5 and 7, say a curse word instead of the number. Whoever messes up first drinks.

4 - Thumb Master
You are now the Thumb Master. Every time you put your thumb on the table, all other players must do the same. The last person to thumb the table drinks.

3 - Me
Take one drink yourself.

2 - You
Select another player to take one drink.


Have an idea to improve the game? Let us know and if we use your idea, we'll send you a gift. Contact us at [email protected] or visit our website http://circleofdeathgame.com