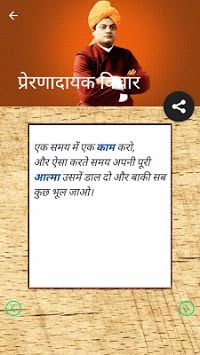 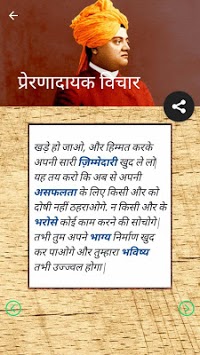 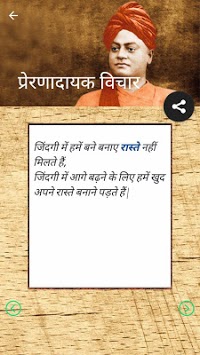 Swami Vivekananda (1863-1902) was a highly influential and inspired Indian sage. Chief disciple of the 19th-century saint Ramakrishna, he was a key figure in the introduction of the Indian philosophies of Vedanta and Yoga to the Western world and is credited with raising interfaith awareness, bringing Hinduism to the status of a major world religion during the late 19th century.

★ 100% Free and Offline
★ 101+ super hit quotes from Swami Vivekananda.
★ This app is in easy Hindi Language.
★ Simple app. Works offline. No internet connection needed!
★ Professionally designed, user-friendly and intuitive interface.
★ Clear Hindi font for better readability.
★ Easy to use.
★ You can share any quote to the social sites Whatsapp, facebook, instagram and other sites.


Want to receive latest update on our apps?
Subscribe us at : https://www.facebook.com/fullfunapps/