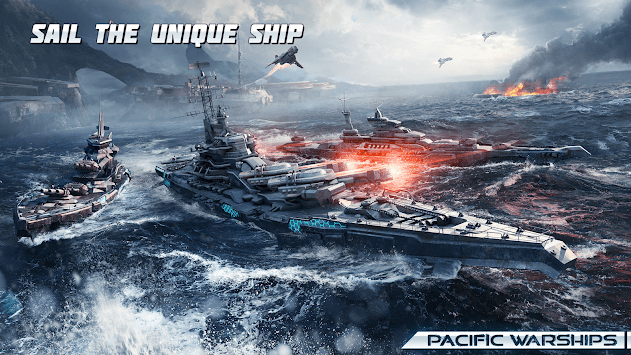 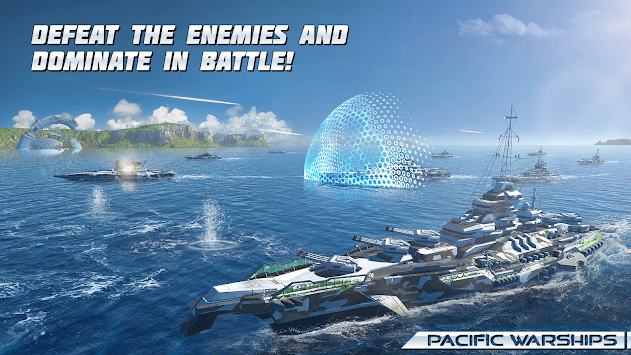 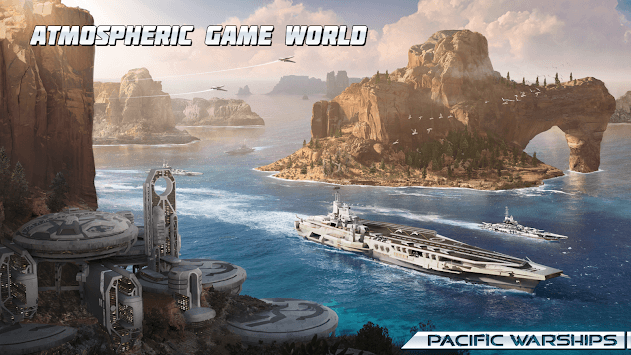 Try PACIFIC WARSHIPS wargame in a massive torpedo and missile sea skirmish. Get your crew and guardian ship ready and deploy to cruise the Seven seas. Sea shooter meets tactics in an ultimate naval modern warfare. Calls of lethal weapons, artillery and warships to combat your enemy with a tsunami of missiles and torpedoes in a REAL-TIME online team PVP. 🚢🚢🚢

Collect your ships in a seaport to form the best fleet from Atlantics to Pacific rim and boat the seaways where oil tankers used to sail to face the enemy in ocean war. Become the War Armada of the seashore in a challenging battle!

⚓ Absolutely stunning 3D graphics
Future is here! We created the most realistic visual shooter for mobile devices. Play the sea game and check it out! The game will run even on a budget device!

⚓ Abilities
Get aggressive in your warfare tactics with a warships cool abilities. Master the perfect shooting dmg to become the best navy commander of the modern and future ship world!

⚓ Upgrade system
Upgrade your ships and war ship to become stronger in any conflict! Conquer a variety of guns, missiles, chassis and deck improvements that forge your battleship into an ultimate lethal weapon. All of the upgrades are actually changing your ships’ look and armor.

⚓ Captain’s skills
Improve your stats by researching a skill tree. Remember, it’s not only about a ship - the crew matters too. Learn new skills and sink enemy ships in a quick blitz!

⚓ Call of Armada Fleet
Super detailed warships such as Arrow, Avenger, Spearhead, and Eclipse, divided into several classes from lightweight destroyers to battleships and dreadnaughts, which look like floating fortresses are on duty!

⚓ Capture Points
The team that has retained more points wins! Form a battle alliance with the teammates, do not let the enemy capture your point! Use torpedos or active abilities!

⚓ Skill Blitzkrieg
Naval squad of different ships from around the world! Pick ones that match your playstyle tactics. The goal is to spot, scout and sink enemy ships, you decide to torpedo enemies in close combat or barrage them from afar like a juggernaut.

⚓ Advanced Matchmaking
All sea battles in the game are created automatically, all you need to do is click the "FIGHT" button, teams and opponents will pick up automatically so you can start having fun fast!

⚓ Amazing Gifts and Rewards
Make sure to come back to the game for the waves of battle rewards, upgrades and gifts!

Option to select graphics for weaker smartphones
A weak device? You can choose the graphics options, from low to high!

★★★ Our multiplayer PvP shooter is completely FREE to download!

Perfectly drawn battlefield textures, beautiful sky and islands, vivid sea. We created a next-level naval shooter. Regular updates and new elements are waiting for you in online multiplayer games of 2018.

Still not sure what to play? Choose PACIFIC WARSHIPS

Note:
Dear users! We are constantly working on improving the game, create new maps, new features, new ships, improving graphics and working hard on the optimization! Please write us on the mail or in support if you found bugs and issues.

Want to ask about the game or find friends and allies?
Facebook: www.facebook.com/GDCompanyGames
Support: [email protected]