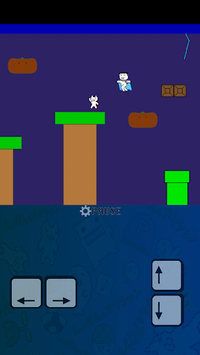 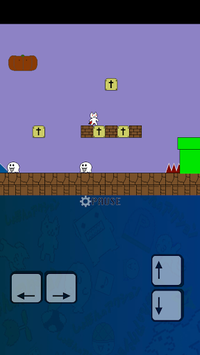 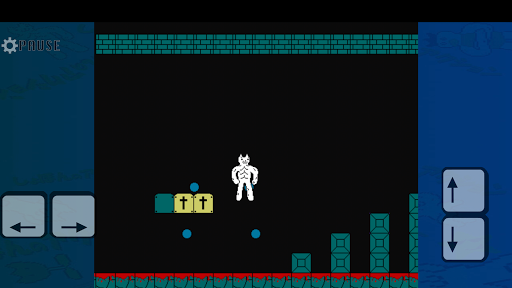 Enjoy the special and terrific Halloween edition, with new graphics and effects. Rob in tombs, run away from the ghosts. Find the hidden magical artichoke in the castle.

The world of 2ch is in danger! The Muscular Evil Chicken has stolen the sacred artichoke from the great forum administrator. (`O '*)
With the power of sacred artichoke, he tries to manipulate the peaceful emoticons inhabitants of 2ch for his evil purposes. "O (¯ - ¯ *)

The only hope of salvation of the 2ch world lies in Syobon (`· ω · '), a young cat-emoticon. Syobon, with its multiple lives, is the only one who can challenge the power of the sacred artichoke and beat the muscular chicken. (〃 ^ ∇ ^) o

You'll need to be careful and memorize a thousand traps that you face in your way. Only you and Syobon with his infinite lives can save the 2ch world.

Syobon Action is a jump and run Game/Platforms parody of Super ***** Bros. But there are traps and nasty peculiarities which make the game more hard. A simple run and jump is not possible. Skill and a bit of imagination is needed here.
The game requires the player to think logically through trial-and-error in order to complete the game.