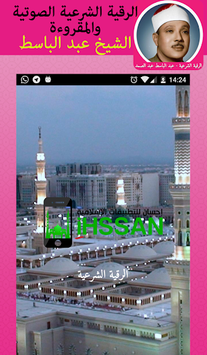 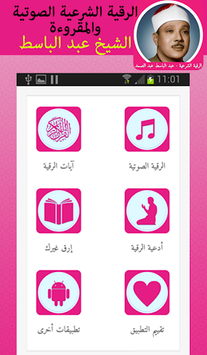 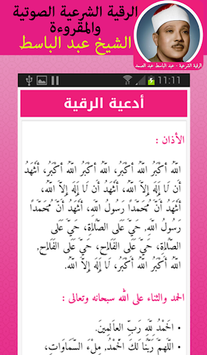 Free and supported islamic app for any muslim to read and listen to ruqyah with recitation of sheikh Abdelbaset, this ruqyah is offline.
With this Ruqyah of Abdelbaset you can protect you and your family from alain, sihr and hasad based in noble quran.

Ruqyah is Spiritual Healing, It is commonly translated in English as "incantation" which carries a negative meaning, since the word incantation is usually associated with magic, spells, and witchcraft. However, Rokia charia in Islam is the recitation of Quran, seeking of refuge, remembrance and supplications that are used as a means of treating sicknesses and other problems.

Features of this audio mp3 and book Ruqyah with Quran:
• Reciter is sheikh Abdelbaset.
• Play Rokia charia rokia charia without internet(offline).
• Pausing for incoming phone call when you are playing ruqyah.
• Stop playing when somebody call you.
• Islamic and elegant design.
• Read how to protect yorself.
• How to protest others with rokia charia
• Ayat and Duaa of Ruqyah

Conditions of a person who treats with Rokia charia:
1) He must have the right belief in Allah (Based on Koran, Sunnah, and keep away form Shirk, etc).
2) He must have sincerity in worshipping Allah and have a good intention in treating people.
3) He must be firm in his obedience to Allah, and keep away form all that is forbidden.
4) He must keep far away from all unlawful places and situations that canlead to what is forbidden, for example isolating himself with a female, etc.
5) He must guard the affairs of his patients and protect their secrets.
6) he must propagate the religion of Allah. Give the Patient advice and admontitions on the rights of Allah with regards to His commandments and prohibitions.
7) He should have knowledge about the affairs of the patient and sicknesses.
8) He should have knowledge about the reality of Jinns (so as not to have them harm or threaten him while curing the patient).

I hope you like this islamic app and the reciter Khalid Al jalil, and don't forget ask me if you have any question to improve it.
Don't forget to download this Ruqyah of Abdelbaset voice and Please send us your feedback and feature requests and keep us in your prayers.
I hope this islamic app help any muslim.