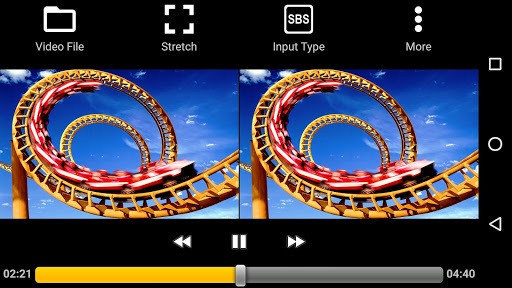 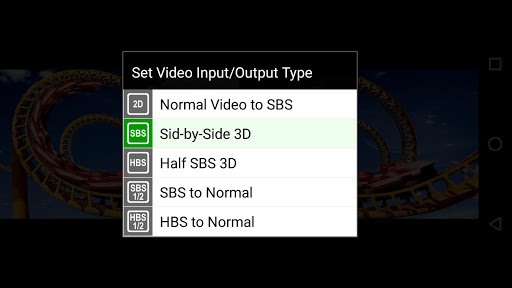 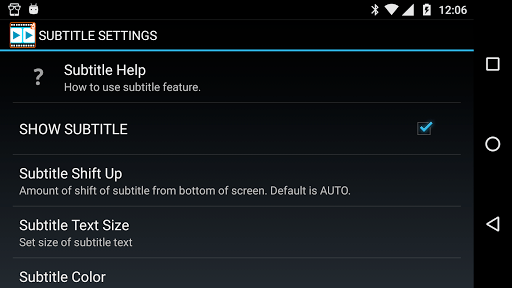 A simple, ad-free, tiny (less than 0.1 MB!) video player that plays 2D and 3D videos suitable for Virtual Reality VR displays that use mobile as the screen, such as Google Cardboard. It supports Side-by-Side (SBS) as well as Half Side-by-Side (HBS / HSBS) format videos. It works on any phone, limited only by the device's video capabilities. If you want to use it with Gear VR, do not plug in the usb port.

A few points to note:
- It will play only video formats that are natively supported by your phone (more info below)
- It does not play web videos such as those from YouTube.
Use our iPlayIT app or iPlay Pro app for that.
- It does not use the magnetic navigator controls, head tracking etc.
Use an OTG or Bluetooth mouse instead.
- It does not play 180 or 360 degree Full Virtual Reality videos.
Use Google's Cardboard Player for those.
- It is a player, not a converter. It cannot save converted files.

If you are not familiar with cheap VR displays that can convert your mobile screen into a virtual movie theatre, checkout these links:
https://www.google.com/get/cardboard/
http://www.tomsguide.com/us/vr-headset-guide,news-20644.html

Regarding Supported Audio/Video formats
The app does not include any media codecs due to its tiny size. It supports whatever the Android OS in your device supports. For a list of supported formats, refer to the link below:
https://developer.android.com/guide/appendix/media-formats.html

While mp4, 3gp etc are universally supported, support for other video containers such as mkv, avi, flv etc is dependent on your android flavor. Again Android does not support 5.1 multi-channel audio formats such as DTS and Dolby AC3 unless enabled by manufacturers. In such cases, you can use any video converter for PC/Mac such as Handbrake to convert the video to an mp4 format with stereo aac track.

Please mail us ([email protected]) in case of any doubts.