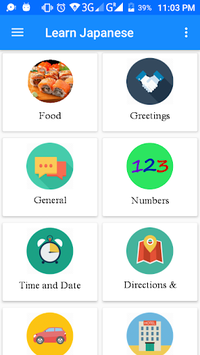 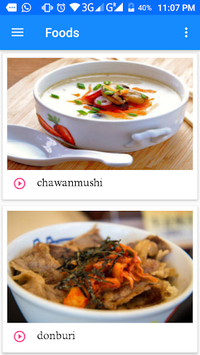 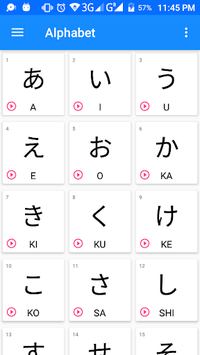 Easily learn Japanese phrases and words! Speak Japanese with confidence!
The “Learn Japanese” app has many useful Japanese phrases and words (e.g., “Thank you!”, “How much?” or “A table for two, please!”). When you tap a phrase, the app speaks it aloud. There is no guessing as to how to pronounce the words. And if the app is talking too quickly for you, simply tap the snail icon to hear the words more slowly. And if the app is talking too quickly for you, simply tap the turtle icon to hear it more slowly. Listen to pronunciation recorded by native Japanese speaker and then record and play back your own voice to practice your Japanese speaking skills!
When traveling to Japan (e.g., Tokyo or Osaka), make sure you bring the app with you! Ideally, you listen to a phrase and repeat it, but if your accent is terrible, you can play the voice on the app to local Japanese people (e.g., a waiter or store clerk). Language barrier while traveling abroad will no longer exist!
You want a handbook of essential phrases, sentences!
contains over 1000 commonly-used Japanese phrases and vocabularies for travelers and beginners in 18 categories.
+ Japanease Alphabet
+ Japanese Popular Food
+ Greetings
+ General Conversation
+ Numbers
+ Time and Date
+ Directions & Places
+ Transportation
+ Accommodation
+ Eating out
+ Shopping
+ Colours
+ Cities & Towns
+ Countries
+ Tourist & Attractions
+ Family
+ Dating <3
+ Emergency
+ Sickness
+ Tongue Twisters
native pronunciation
App completely offline. No require internet to learn
Search by Japanese or English
Save your favorite sentences for review later
When you travel, business to Japan, don't forget this app